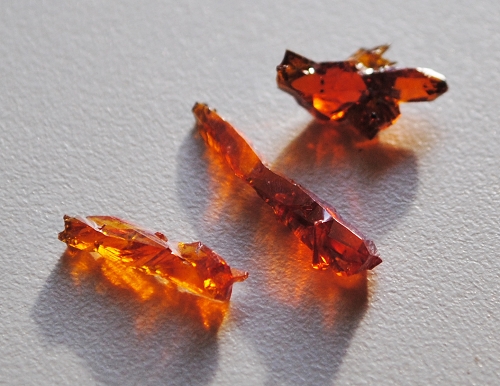 SCIENTIFIC: Natural crystals of Zincite are rare. Natural Zincite crystals are composed of Zinc manganese oxide and occur in granular masses in metamorphic rocks. Most Zincite from Poland available today is actually a product of smelting, much like slag. Zincite’s hardness is rated at 4 on the Moh’s scale of mineral hardness. Zincite color ranges from orange-yellow to deep red. Zincite is transparent to almost opaque with a resinous luster. Zincite is found in Namibia, Poland, Spain, Australia, and in the USA.

ATTRIBUTES: Zincite increases life force and is empowering facilitating courage, passion, and creativity. Zincite removes energy blocks from the body and allows the life force to flow unhindered. Zincite attracts abundance at a physical and spiritual level and may be used to anchor the light body securely into the physical realm. Zincite grounding vibrations helps one manifest their goals in the physical world. Zincite resonates with the lower chakras, re-energizing the whole body, stimulating creativity and fertility. Zincite assists with the rise of kundalini energy and enhances gut instincts and intuition. Zincite instills confidence and the ability to find your own strength. Zincite pushes you to go forward if you suffer from lethargy or procrastination and helps one embrace necessary change. Zincite helps to clear the mind and brings new energy to ideas and furthering goals. Zincite helps to bring together like-minded people and is a great crystal tool for furthering relationships and group promotion. Zincite gently alleviates menopausal systems or empty-nest syndrome.

HEALING: Zincite improves the skin and the hair, and is beneficial for the prostate gland and for menopausal symptoms. Zincite boosts the immune system and the energy meridians of the body. Zincite may be helpful in the treatment of CFS, AIDS and auto-immune diseases, alleviates candida, mucus conditions, and bronchitis. Zincite stimulates the organs of elimination and assimilation and has been used to treat problems of infertility.

Zincite may be a helpful crystal tool for those trying to break through perceived limitations and blocks and get back into the flow of creativity and manifestation.

Zincite is a great first aid remedy for shock or trauma.

In crystal body layouts or healing grids, Zincite stimulates the lower chakras and moves the energy upward through the upper chakras increasing energy and vitality.

The energy of Zincite combines well with Carnelian, Golden Labradorite, Selenite, and Moldavite.