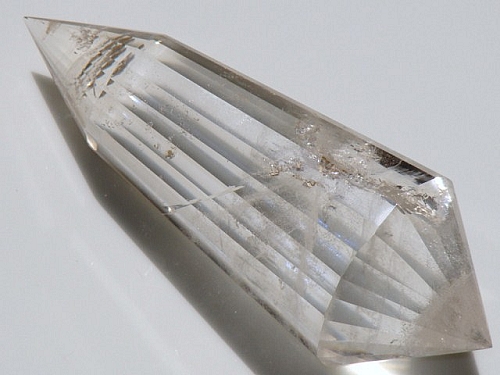 ATTRIBUTES:  The Vogel Wand Quartz Crystal is a faceted shaped crystal created by Marcel Vogel (1917-1991), a research Scientist who studied the energies and positive healing effects of Quartz Crystals. Vogel-cut crystals are crystal instruments that serve to store, amplify, convert and charge subtle energies alike. Marcel Vogel cut wand to reflect the alchemical transmutation of "as above, so below." The Vogel wand was cut to match the frequency of water molecules so that it would resonate with the liquid found in physical structure of our cells enabling crystalline vibrations to transmit and amplify energy at the most optimum levels. Marcel Vogel believed the real origin of illness is found in the Etheric body. The Etheric body is said to hold the memory of physical or emotional injury and may become stagnant, distorted or stuck, resulting in illness. According to Vogel, when light from the higher realm comes into a person's body, it can get refracted when Etheric body is not stable, resulting to illness.  The Vogel cut crystal wands give immediate access to the Etheric body, stabilizing and bringing it back to optimum condition, even when there is physical or emotional trauma.  When using a Vogel cut crystal, the first step is to send clear intentions, healing and love as one meditates with the wand over the thymus (located in the middle chest or higher heart).  The person doing the treatment with a Vogel cut crystal wand directs the crystal's energies in an amplified manner with an up and down motion in close proximity to the person's body. The individual receiving treatment visualizes the area to be treated and focuses on the cause of discomfort, imaging released with a pulse of breath.  The Vogel cut crystal energetically breaks up and clears patterns of trauma stored in bones, organs or tissues.

TWELVE-SIDED Vogel Wands focus consciousness and are effective in receiving information and creating unlimited reality. Twelve-sided Vogel wands are excellent and efficient manifestation tools.  Be careful what you ask for, because you are going to get it, in spades and probably a lot faster than you expect.

THIRTEEN-SIDED Vogel wands have the ability to hold thoughts and to know the unknown. Thirteen-sided Vogel Wands connects one to the Divine and universal consciousness.