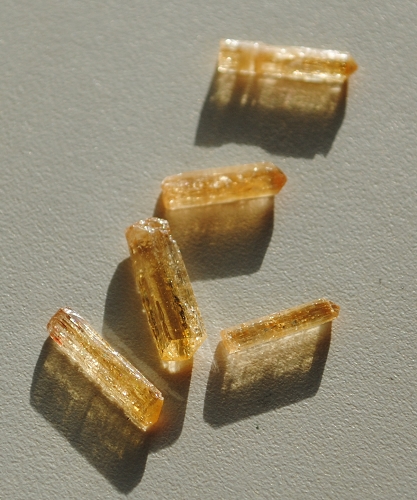 SCIENTIFIC:  Topaz forms as aluminum silicate fluoride hydroxide of prismatic crystals with parallel lengthwise striations.  Topaz typically occurs in during the last stages of crystallization of igneous rocks and is found in the cavities of rhyolites, granites, hydrothermal veins and alluvial deposits. Topaz’s hardness is rated at 8 on the Moh’s scale of mineral hardness. Topaz color ranges from golden yellow to shades of pink, blue, orange, brown, violet, colorless, and sometimes green. Some Topaz are heat treated to achieve their color. There are several theories as to where the name Topaz originated. Some say the crystal is named after the legendary island of Topazios found off the coast of Egypt in the Red Sea. Some attribute the name coming from the Sanskirt word “Tapaz” which means “fire.” Topaz is transparent to translucent with a vitreous luster. Topaz is found in Russia, Brazil, Africa, Germany, Scotland, Mexico, Sri Lanka, Australia, Pakistan, Japan, and in the USA – California, Colorado, Utah, and Texas.

ATTRIBUTES: Topaz promotes truth, compassion, and forgiveness. Topaz supports a sense of trust in the universe allowing one to release doubts and uncertainties. Topaz is a mellow, empathetic stone that directs energy to where it is needed. Topaz vibrant energies brings joy, generosity, abundance, success, and good health to your life while releasing all that is negative. Traditionally, Topaz has been known as the "stone of love" allowing one to be receptive to love from every source. Supporting affirmations and manifestation, Topaz assists one with the attainment of goals and taps into inner personal resources. Topaz helps one see the bigger picture and assists with the communication of ideas.

HEALING: Topaz may help to aid digestion, stimulate metabolism and the absorption of nutrients, combat anorexia, and restore the sense of taste. Topaz may also fortify the nervous system and help prevent infections. Topaz may be used to help correct vision issues and diseases of the eyes.

BLUE TOPAZ stimulates the throat and third eye chakras enhancing verbal communication and mental clarity. Blue Topaz is an excellent crystal tool for deepening states of meditation and connection with the angels. Blue Topaz stimulates psychic abilities. Blue Topaz fosters support for living your own life and listening to your heart truth. Blue Topaz’s gentle energetic vibrations are supportive for releasing what no longer serves you and promotes feelings of forgiveness. Blue Topaz Vibrates to the number 3 and resonates with the astrological signs of Sagittarius and Virgo.

CLEAR TOPAZ aids with the clarity of your thoughts and the awareness of the karmic outcome that these thoughts and actions may create. Clear Topaz energetic vibrations may result in a quickening of time between intention, visualization, and realizing actual physical manifestation. In healing, Clear Topaz removes stagnant or stuck energy and may be helpful with the purifying of emotions and supports change and self-realization.

GOLDEN TOPAZ also known as IMPERIAL TOPAZ is energetically uplifting and removes perceived limitations. Golden Topaz strengthens faith and optimism. Golden Topaz’s energetic vibrations enhance creativity and will power. Golden Topaz is an excellent crystal tool for conscious attunement as it connects to the highest forces in the universe. Golden Topaz is beneficial for those unsure of themselves, as it bestows charisma and confidence while remaining generous and open-hearted.  Golden Topaz helps you recognizes your own abilities and attract helpful people and mentors.  In healing, Golden Topaz may be helpful to regenerate cellular structures and may be beneficial in the treatment for nervous exhaustion. Strengthening the solar plexus, Golden Topaz may be supportive in the treatment of the liver, the gallbladder, and the endocrine system. Golden Topaz vibrates to the number 9 and resonates with the astrological signs of Sagittarius, Leo, and Pisces.

PINK TOPAZ is known as a stone of hope. Pink Topaz helps one gently release old patterns of behavior and dis-ease. Pink Topaz’s energetic vibrations support the way to radiant health and well-being.

RUTILATED TOPAZ with beautiful threads of golden rutile found in its crystal structure is rare. Rutilated Topaz is an effective crystal tool for visualization, manifestation, and protection. Rutilated Topaz an excellent stone for scrying or divination as it brings deep insights when programmed with your intentions.  Rutilated Topaz may attract love and bring more light into one's life. Rutilated Topaz vibrates to the number 8 and resonates with the astrological signs of Sagittarius, Gemini, and Scorpio.

Meditate and speak affirmations while holding a piece of Topaz to magnify the manifesting power of your dreams and desires.

In crystal body layouts or healing grids, Topaz is an excellent crystal tool for cleansing the aura. Topaz increases the ability to align with higher light frequencies which stimulate the second and third chakras.

For Gaia Healing, Topaz may be placed in an area of disturbed Earth energy. Topaz draws communities together so they may work compassionately and humanely in solving issues and challenges.