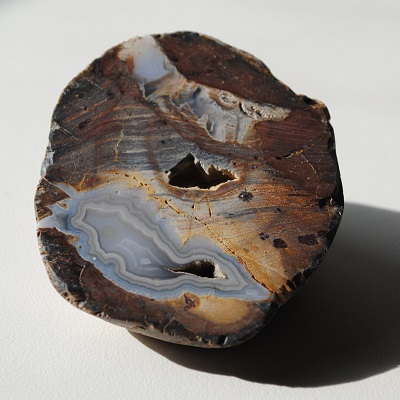 ATTRIBUTES: Thunderegg is a fortification of parallel straight banded layers of agate usually found in spherical formations that are formed in round hollows of old volcanic rocks. The interior of Thundereggs sometimes containing Opal, exhibit in a star or flower shape design. Thundereggs, like Agate, are grounding, soothing and calming stones that create emotional, physical, and intellectual balance. Thunderegg will aid with centering and stabilizing physical energy. Thunderegg harmonizes the yin and yang, the positive and negative forces that hold the universe in place. When opal is present, Thunderegg enhances cosmic consciousness, and facilitates psychic and mystical visions. Thunderegg helps to build self confidence and self-esteem. Thunderegg enhances mental functions, improves concentration, perception and analytical abilities. In ancient mythology, it was believed that Thundereggs were thrown down to the earth by angry gods when displeased by human events. Thunderegg may help one overcome negativity and bitterness of the heart. Thunderegg shows what your emotional state has been in the past and other lives and teaches you to take responsibility for your emotional being and encourages positive behavior. Thunderegg helps to release anger and fosters love and the courage to start over. Thunderegg fosters community awareness and rightful actions. Thunderegg may be helpful in linking one with other like-minded people. The beautiful interior star or flower shape of banded agate may provide a link with “star people” on this planet and from other realms. Thundereggs vibrates to the Master Number 55 and the astrological sign of Scorpio.

HEALING: Thunderegg is a powerful throat healer. Thunderegg counteracts blocked self-expression releasing shoulder and neck problems, thyroid deficiencies, and throat and lymph infections. Thunderegg lowers fever, treats arthritic and bone deformities, supports the skeletal system and may be helpful in healing fractures. When opal is present, Thunderegg may assist in the treatment of Parkinson's disease, infections, fevers and strengthens memory.