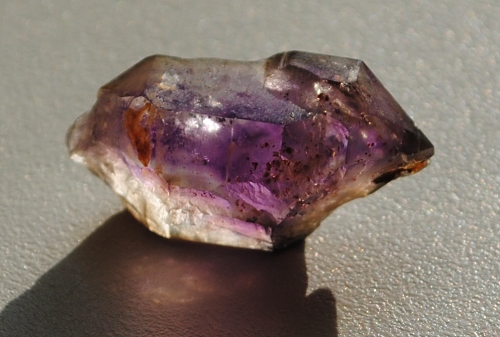 VIBRATION: Number 5 and 9,and Sacred Seven as Number 7

ATTRIBUTES:  Super Seven is also known as Sacred Seven. It is a combination of seven minerals. Amethyst, Cacoxenite, Goethite, Lepidocrocite, Clear Quartz, Rutile, and Smoky Quartz. In addition to the properties of the seven minerals, the following attributes applies. The Super Seven is a "flambeau" mineral which is known to exhibit tiny flames of "fire" also known as the phenomenon of St. Elmo's Fire, an ethereal auric light reminiscent of the holy light which has been seen due to atmospheric electricity on church towers and treetops. It produces electromagnetic waved providing the self-luminous quality and assists one in seeing auras and in maintaining the connection between the physical and ethereal planes. It has been found that smaller segments of the mineral, the tumbled stones, contain all of the energies of the total configuration.

Analogous to Sirius, the brightest star in the heavens, it can assist one in all endeavors, promoting conscious awareness of that which has remained hidden for eons. It provides for mental impressions denoting spiritual/intellectual truths, allegories to assist in advancement, and images of ones position, appointment, and progress in the Cosmic Plane.

The Super Seven is being used as the nucleus of the universal brotherhood of humanity, embracing karma, causation and the potential for reincarnation, all based upon the science of Theosophy. It represents information for both individuals and for the collective, assisting one to understand and to facilitate the changing on ones thinking in order to set in motion the new laws allowing peace, harmony, and love to guide and govern ones being. It never needs cleansing or energizing. It has been used to promote telekinetic pursuits, telepathy, clairaudience, clairvoyance, awareness-channeling, universal creativity to further healing and wellness on all levels, and for Earth-healing.

Rutilated Amethyst is a rare form of Amethyst which does not contain rutile, but contains Goethite, which brings beauty to the field of user. Goethite helps one to attune to the ethereal realms, and enhances communication with the the angels, sometimes allows one to hear the music of the ethers. It enhances communication on the physical plane and strengthens the connection with other worlds and beings in those worlds. It can enable one to predict future events and can be used to enhance the abilities of divining rod.

Cacoxenite is a mineral stone of ascension, being used by many during the myriad of planetary alignments, world meditations, and during the full and new moons, in order to increase spiritual awareness on all levels, to transfer healing energy to the Earth, and to provide a loving and ethereal connection between all of the universe. It can also awaken memories of the nature of ones prior existences. It has been used in holistic treatment, allowing one to recognize all of the relationships between each integral part of the body, mind, and emotions.

Lepidocrocite brings grounding with intellectual stimulation, fortifying the structures of enhanced equilibrium between all chakras and auric bodies. It has been used, when within the quartz and amethyst structures, to enhance perception, intuition and instinct. The energy is integrated with healing, with storing information, with communicating, with balancing the energy and with teaching. The use of this mineral as a bridge, between the consciousness and matter, brings practicality to the application of ones insight and powers of manifestation. It has been used to enhance communication with the angelic realm, to advance astral travel and to maintain the connection between the self and the astral body.

Clear Quartz is used extensively in meditation, spiritual development, and healing. Quartz is said to bring the energy of the stars into the soul. The natural quartz crystal was said to both harmonize and align human energies thoughts, consciousness, emotions with the energies of the universe and to make these greater energies available to humanity. The natural tendency of quartz is for harmony and it is recognized as a stone of power.

Rutile has been known to represent both the lovely hair of Venus and the sweet tipped arrows of love, to the appearance of wheat straw and angel hair. The ethereal aspects of love, ease in transition, growth in all avenues of ones development and the calm reason and order. It used for healing and balancing the aura by repelling negative energies, a stone for stabilizing relationships, marriages, mental processes and emotional and physical imbalances. A type of Rutilated quartz, which does not appear to be Rutilated, as asterated quartz; asterated quartz exhibits the pattern of a starlike luminous figure on the surface of the stone, during conditions of transmitted light. The additional properties include the connection to the star people, the genetic structure and cellular communication configuration being contained within the energy of the stone. This provides for communication with those from other galaxies, as well as other planets in the solar system of the Earth.

Smoky Quartz can facilitate to relieve barriers, clear mental channels which may exist between beta and alpha state of the mind. This stone does not astound one with its speed, it is prolonged, yet intense and gentle actions; on the higher levels, such as meditation. It tends to refine the vibratory energies when one is in the state of meditation, allowing for both the clarity of thought and the elimination of impeding willfulness. It can be used to initiate a powerful force field which will absorb many forms of negativity, both from within oneself and from outer sources. It is also an excellent grounding stone.