Posted by Raven Crystals on 10/29/2017 to Gaia Qi and Elemental Energies
Share |
Spending a day trekking down the South Rim side, across the bottom, along the river and creek, and up, up, up the North Rim side of a rocky canyon trail gave me the opportunity to consciously create a prolonged state of face smiling, appreciation, and a heightened awareness of my surroundings. For 28.3 miles, I was engulfed in the natural beauty of an environment that is 6 million years old (and much older in other parts), complimented by the energetic grounding of my moving body, the companionship of great friends, and the rocking vibrational support of THE Grand Canyon.  Woohoo ~ One of the Natural Wonders of the World ~ if you EVER get a chance GO! 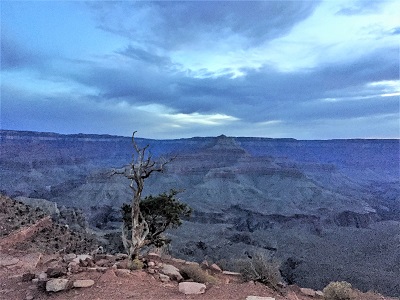 "The world and I reciprocate one another. The landscape as I directly experience it is hardly a determinate object; it is an ambiguous realm that responds to my emotions and calls forth feelings from me in turn"  David Abram ~ Spell of the Sensuous
Grand Canyon Adventure
Rim to Rim
September 2017 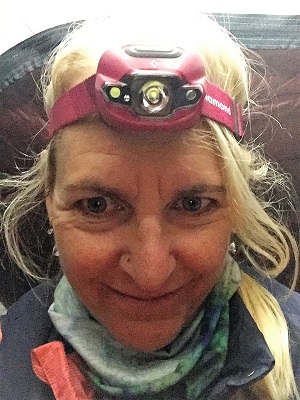 O'dark thirty in the morning. "Yes. Please! I would love to have a cup of coffee." Turned out to be the best cup of coffee EVER sipped while watching the silent, stellar desert night sky. My feelings, like my stomach contents, were a bit swirly as I took a final inventory of snacks, water, and gear prep prior to departure. An adventure of many firsts (just say yes), this was my first time using a headlamp. I wasn’t even sure if I had it on the right way (safety first – I did put in new batteries). Eeeeeek, I said talking to myself, as I hoisted my hydration pack, hiking poles, etc. out of the tent and walked over to the van. As we drove to our departure location at the South Rim, it really started to sink in, as I realized that it was still quite dark outside and I was about to start running with a headlamp on a rocky trail down the side of THE Grand Canyon....and that was just going to be the beginning of a most excellent adventure.....Woohoo!  Before I knew it, headlamps were turned on, and we were off headed down the South Rim on the South Kaibab Trail... 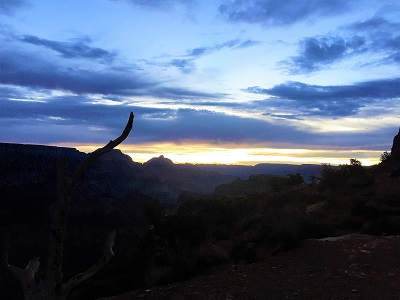 Witnessing the break of dawn in the Grand Canyon. 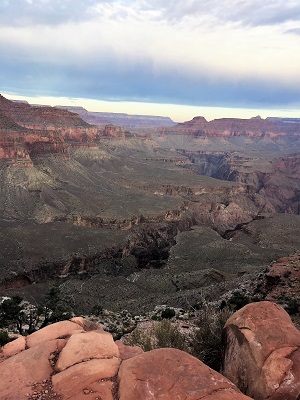 The morning light gradually revealed the magnificence and enormous size of the canyon. 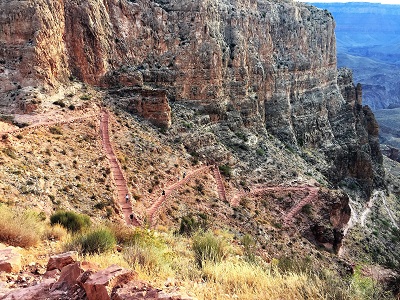 The South Kaibab trail is filled with a generous amount of switchbacks leading to the floor of the canyon. 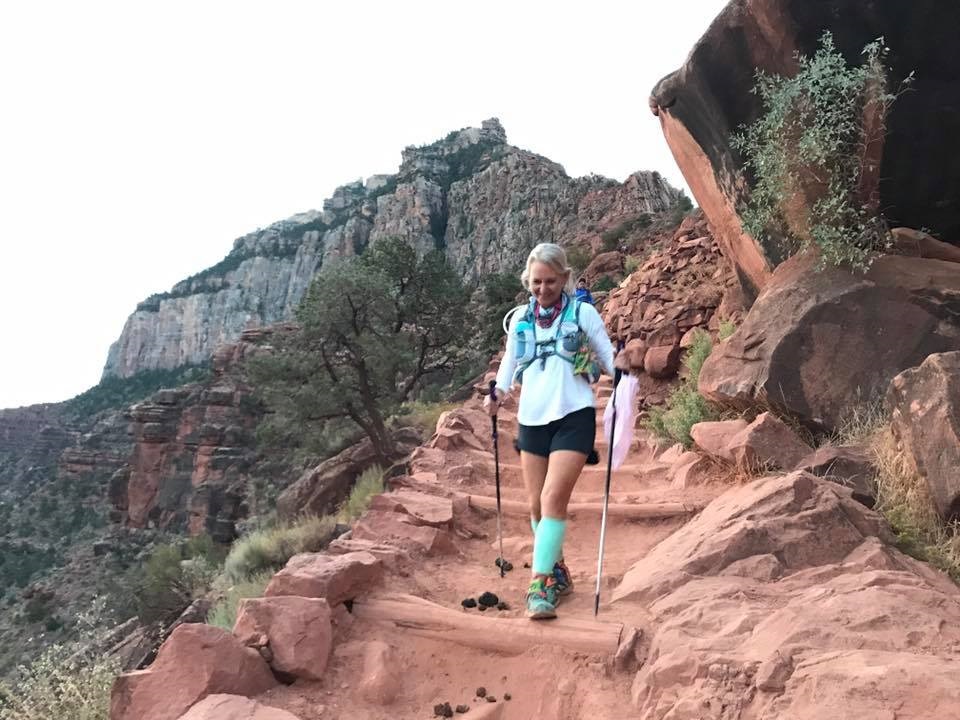 At this point, now that it was daylight and I could actually see the trail, I thought to myself,"I can't believe I fearlessly trekked and ran down the top part of this trail in the dark! WTH. That was super fun." Technical bits of trail, giant steps down, combined with mule droppings, and sheer drop-offs, were conducive to really being present in the moment and required careful foot placement. 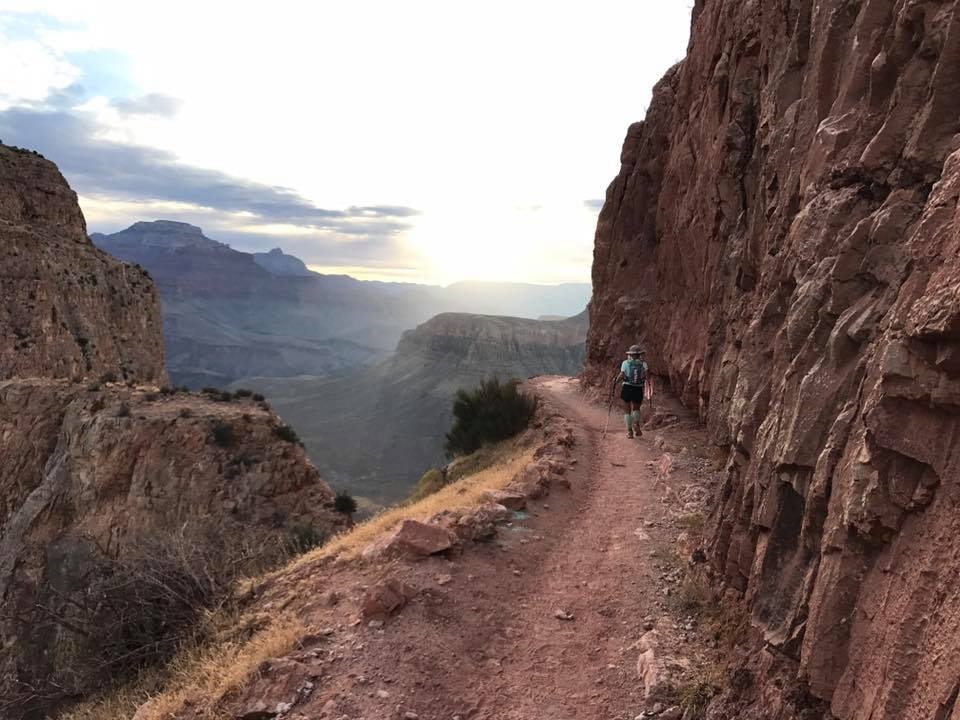 Around every corner was another "wow" experience. 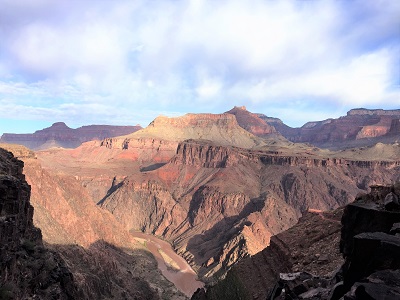 The first glimpse of the muddy brown Colorado River 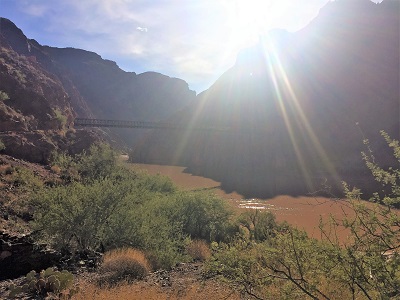 The trail went through a really cool rock tunnel. Plunged in momentary darkness, we followed the bright light to the end of the tunnel, and surprise, it opened up to a bridge! Suspended 75 feet above, at Granite Gorge, we crossed over the Colorado River via the  Black Suspension Bridge (the first of many footbridge crossings - who knew?!). We replenished our water supplies at Phantom Ranch before crossing through the notorious "Box" section of the North Kaibab Trail. 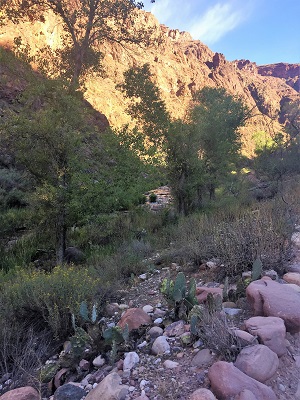 The trail parallels the Bright Angel Creek. I LOVE the sound of flowing, bubbling water over river rocks. 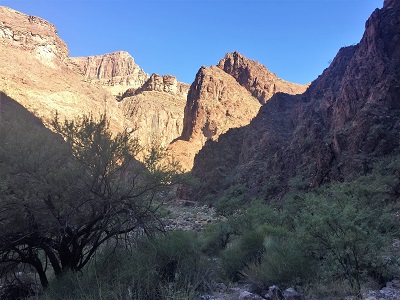 Ahhhhhh...cool shadowy trail tucked in next to an interior canyon wall. It was so nice to run this stretch of trail after all the previous down hill movement. There were random pockets of air that almost felt chilly. Refreshing and reinvigorating. 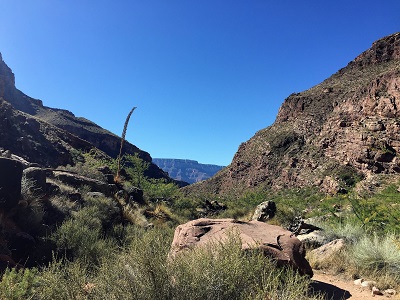 Mid way-ish across the bottom of the canyon. I sneaked a peak over my shoulder. Wow! There stood the South Rim in the far distance. It seemed like this day had gone on forever in a magical time stretching way. It had been a long time since this morning's cup of coffee. Every single second of the day had been awesome and it wasn't close to being over yet.

It was at this point, as I was focusing my sight forward, a party of 8 to 10 pirates came running around the bend in the trail. Fully dressed pirate wenches, mates, and a captain with a full on wig, britches, and buccaneer-scarfed head (toting a bottle of rum, of course). Naturally, I launched into universal pirate language and yelled out "Ahoy." Introductions and pleasantries were exchanged. Apparently they were at the Grand Canyon for a family reunion. This was their 22nd Grand Canyon Rim to Rim Reunion.
Wow. More awesomeness. 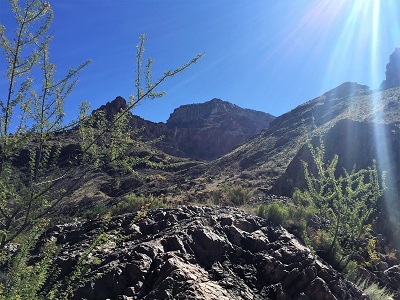 Running along this part of the North Kaibab trail, literally in the middle of the Grand Canyon, gave me a sense of the prehistoric age of the canyon. The Grand Canyon has been and continues to be a wonderful outside laboratory for studying geology, especially as an example of canyon-cutting erosion. The water-carved Grand Canyon has gone through millions of years of slow, steady erosion to achieve its present day form. 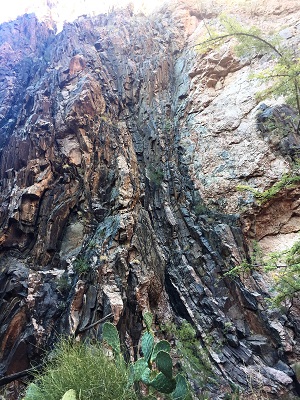 It is thought that the rock layers of the canyon walls are much older than the Colorado River, which cuts through the floor of the canyon. 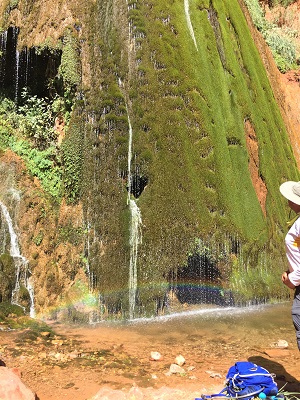 Side trip. We veered left off the North Kaibab trail and onto a trail spur leading to Ribbon Falls. We ended up crossing a sketchy footbridge. "It's okay," said a guy sitting by the bridge, "just don't walk in the middle and make sure you hang on to the side as you cross. Really. You'll want to hang on. Oh. Probably just one person at a time." Hmmmmmm. So we did. After scrambling over some rather large boulders and a small creek crossing, we ended up at the base of a stunning 100-foot waterfall.  You can hike up and around the back of Ribbon Falls or just peel off your clothes and shoes and go for a very refreshing dip in the water. Some people were hanging out in the cave area behind the falls. 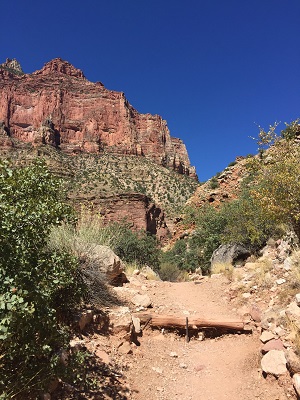 It's well worth the break because, remember, you are still in the middle of the Grand Canyon and have a ways to go to get yourself back out and up to the rim. 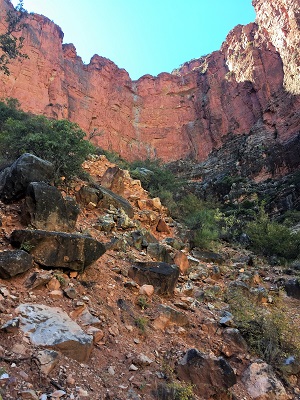 The walls of the canyon seemed to steepen and tower above us as we passed. I felt like I was walking through the church of the Earth. 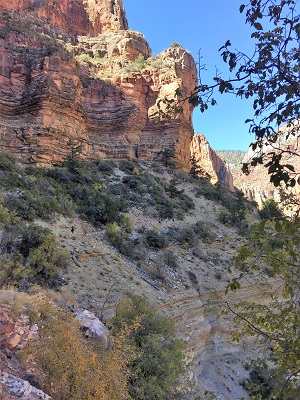 The terrain of the Grand Canyon really started changing as we entered the Roaring Springs Canyon, trekking ever closer to the North Rim. 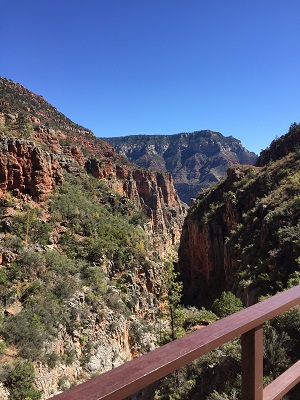 Ah yes, the "Bridge of Peak Experiences." I am pretty sure that's not the bridge's official name, but that's what I called it. It was at this point, twenty miles+ plus, I felt I had reached my maximum experience load for the day and I was “done” and ready to be relaxing at the lodge, feet up with glass of wine in hand. HAHAHAHA. NO. 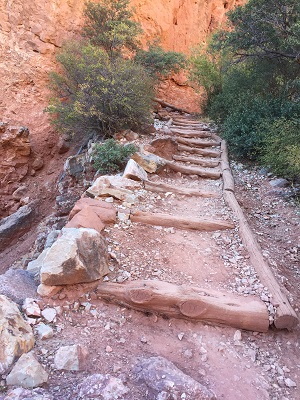 Because there was a lot more trail like this. Going up, and up, and up. The real killer part of this trail was that you would be going up and up, thinking you had made progress and then the trail would dip down for a while and then meander up once again. W.T.H. 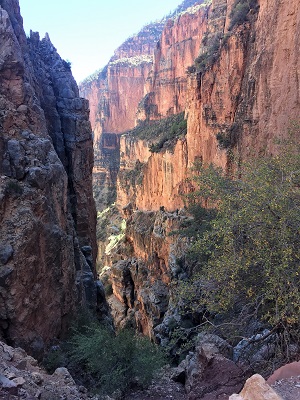 The trail along Roaring Springs Canyon was spectacularly beautiful with some pretty impressive drop offs. Duly noted were the fall colors of the changing foliage and the random amazing benches carved into the walls of the canyon. Very tempting to take a load off and sit awhile. This was the last photo I took during the hike. At this point, I really didn't care. No photos of the Supai Tunnel (which was very cool), or the fall colors, or the mule deer, or.... I sucked down another gel, pulled down the brim of my hat, and continued the trek up. For how much longer, who knew? My watch died around mile 25. Everyone we asked along the way, had the end of the trail pegged at varying distances from a very optimistic "oh just a couple switchbacks and 150 feet and you'll be up to the top" to the more realistic answer of "a good two miles - you are almost there." After awhile, we started to guess how close we were to the top based on how fresh smelling and clean the people appeared to be that were coming down the trail from the North Rim. Trekking the Grand Canyon is like hiking an upside down mountain. I found these last couple of miles to be challenging and was really grateful for all the time I had spent on the trails in previous months training for this adventure. 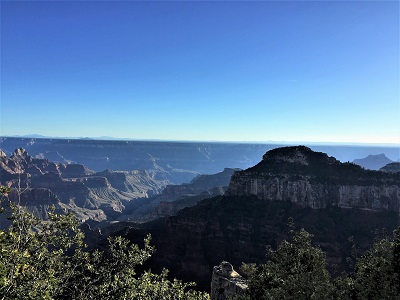 Sunset and satisfaction.
At the North Rim Lodge looking across to the South Rim.
Today, I trekked The Grand Canyon rim to rim.
YES! 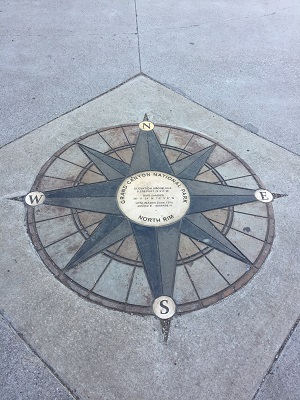 Follow the path to your own North Star.
Embrace and create opportunities in your life and say YES to as much as you can.For more information check out these: