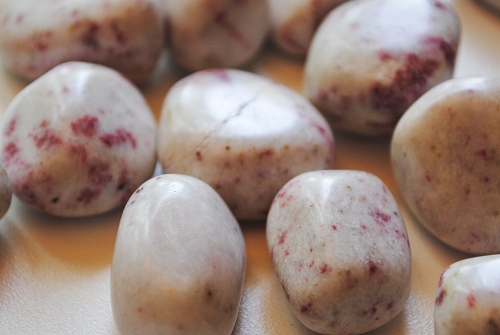 CHAKRAS: Base, Sacral and Third Eye

SCIENTIFIC: Cinnabar, the chief source of mercury, occurs as thick, tabular, needle-like, twinned prismatic or rhombohedral crystals, as well as, in masses, granular, and deposits of earth crust. Widely distributed, Cinnabar deposits commonly occur with other minerals, such as, pyrite, marcasite, and stibnite in veins near volcanic rocks and thermal hot springs. Cinnabar color ranges from bright red to purplish or brownish hues. Cinnabar was widely used as the source of pigment vermillion. Cinnabar is transparent to opaque with an adamantine to dull luster. Cinnabar’s hardness is rated 2 to 2.5 on the Moh’s scale of mineral hardness. Cinnabar is found in China, Peru, Italy, Spain, and in the U.S.A. – Arkansas, California, Nevada, Oregon, and Texas.

ATTRIBUTES:  The name, Cinnabar, is derived from the Persian word for "dragon’s blood.”  Cinnabar’s crystal vibration connects to the acceptance of everything being perfect exactly as it is. Cinnabar is a stone of alchemy. Talisman for alchemical transformation, Cinnabar allows for the spiritual manifestation of self and the understanding of one’s divine blueprint.  Cinnabar stimulates vitality and power.  Cinnabar supports an elegant and appealing demeanor facilitating self-confidence in one’s actions and activities. Cinnabar is a beneficial crystal tool for the realm of business and finance. Cinnabar helps one actualize dreams and create prosperity. Known as a “merchant’s stone,” it is said that Cinnabar may be helpful in acquiring wealth and maintain the state of wealth. Cinnabar increases persuasiveness and assertiveness, as well as, aids in supporting one's endeavors without creating aggression. Cinnabar is associated with the god Mercury. Cinnabar supports mental agility, quick thinking and brilliant ideas. Cinnabar is also the perfect stone for support during periods of mercury retrograde, as it helps to remove obstacles and facilitates gain. Cinnabar is helpful in the field of community work as it promotes the feelings and actions of service and volunteer work within the community. Cinnabar is a stone for Archangel Michael.

Cinnabar may be placed in the cash box to promote an increase in income.

Cinnabar is also the perfect stone for support during periods of mercury retrograde, as it helps to remove obstacles and facilitates gain.

CAUTION: Due to its mercury content, please wash hands after handling Cinnabar.

In crystal body layouts or healing grids, Cinnabar is excellent in removing energy blockages and aids in systemic and energetic alignment. Cinnabar stimulates the flow of chi within the body. Cinnabar stimulates the third eye chakra encouraging the soul to raise its vibrations to the highest frequency and allows one to recognize the divinity in all things. This opens one to greater insight, the ability to see the bigger picture, and to visualize the future. Cinnabar is stimulating to the emotional body and may help to release buried resentment, anger and fear.