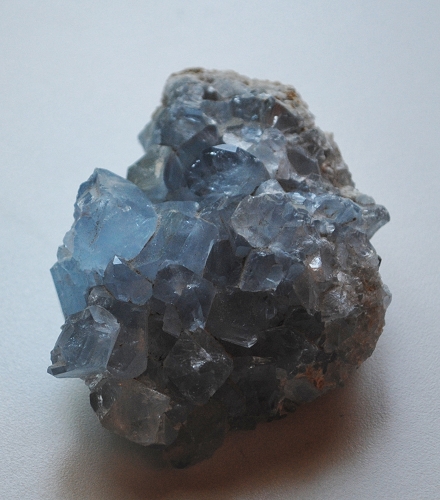 SCIENTIFIC:  Celestite forms as nodules, granular and compact masses, prismatic clusters of crystals, and as tabular orthorhombic shaped crystal structures. Celestite crystallizes in cavity pockets of sedimentary rock such as limestone, dolomite, and sandstones. Celestite also may form from sea water precipitation, or as the result of evaporate deposits, or occasionally in hydrothermal deposits. Celestite’s hardness is rated at 3 to 3.5 on the Moh’s scale of mineral hardness. Celestite color ranges from beautiful shades of sky blue, white to colorless, brown, yellow, orange and red, and sometimes green. Celestine is also known as Celestine. The name Celestite comes from the Latin word “coelestis” meaning heavenly in reference to the sky blue color description of this crystal.  Celestite is transparent to translucent with a vitreous luster. Celestite is found in Madagscar, Mexico, Italy, Canada, and the USA.

ATTRIBUTES:  Soothing Celestite energetically calms and sharpens the mind, dispersing worries and promoting mental clarity. Celestite provides excellent support for organizing mental thoughts and formulating a plan to accomplishment goals. Celestite is a high vibration stone connecting and aligning with divine energies. Uplifting Celestite creates mental and spiritual access to angelic information. Celestite works at a higher light frequency, energetically removing impediments, as it opens and activated the third eye and crown chakras. Celestite brings calmness and harmony to one’s life and relationships. Celestite may energetically support those working through periods of depression clearing negative thoughts with feelings of clarity, hope, and renewal. Celestite energetically supports feelings of Trust – both in self and with others. Patience, perseverance, and faith in the divine process are some of the supportive reminders from Celestite. Celestite assists one with making the right decision and moving ahead on the correct path.

Celestite supports clear vision and communication making it a wonderful help for those who are public speakers.

Celestite is a wonderful addition to healing spaces and the environment as it cleanses the area of negativity and energetically infuses the area with soft, uplifting energies.

In crystal body layouts or healing grids, Celestite facilitates a connection to the universal energies when placed on the third eye chakra. Celestite may be helpful for balancing the polarity of yin/yang energies. Celestite clears, balances and energetically aligns the chakras.

For Gaia Healing, Celestite may be placed in an area of disturbed Earth energy helping to create a vision of peaceful coexistence with the whole creation and supports harmony in the local community and in personal relationships.

The energy of Celestite combines well with all stones as it amplifies and balances the vibration with any crystal combination.

Do not place Celestite in direct sunlight as color will fade :(.