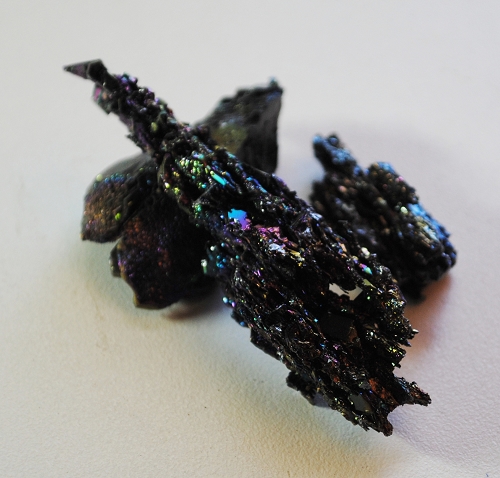 ATTRIBUTES:  Carborundum is a man made crystal also known as Silicon Carbide.  In 1891, Edward Goodrich Acheson discovered Carborundum in an attempt to create diamond using electricity.  Carborundum is composed of carbon and silicon atoms with strong bonds in a crystal lattice formation producing a very strong and hard material, insoluble in water or any solvent.  Carborundum is a very enchanting crystal, with black spiked crystals like a castle, gorgeous rainbow-like luster, iridescent colors of green, blues, purple, pink, yellow, etc.   The brown to black color results from iron impurities.   Carborundum is known to be a master healer and a type of semi conductor, that shines light in all areas.  Pure Silicon Carbide is a poor electrical conductor and very rare on Earth but abundant in space and meteorites, a common form of stardust found around carbon-rich stars.  The rainbow colors found in Carborundum are associated with the Seven Chakras. Carborundum energetically purifies the mind, body and spirit while encouraging intuition and discernment.  Carborundum  enhances communication, transmits thought, conducts electrical impulses and can magnify the energy transfer from the healer and from minerals to the subject of healing . Carorundum provides for a connection and communication to inter-galactic intelligence, mental agility and focus.  Carborundum may help to eliminate feelings of depression, anger, melancholy and relieves stress.

HEALING:  Carborundum is a powerful vitality booster and is useful for relieving headaches, eye strains and any computer related injuries.  Carborundum counteracts blocked self-expression releasing shoulder and neck problems.  It may be helpful in the treatment of bone deformities, skeletal system issues, and healing fractures and may be used to strengthen the teeth. Carborundum may assist in the treatment of Alzheimer’s disease and as an elixir may be used to treat brain fluid imbalances and memory related dis-eases.