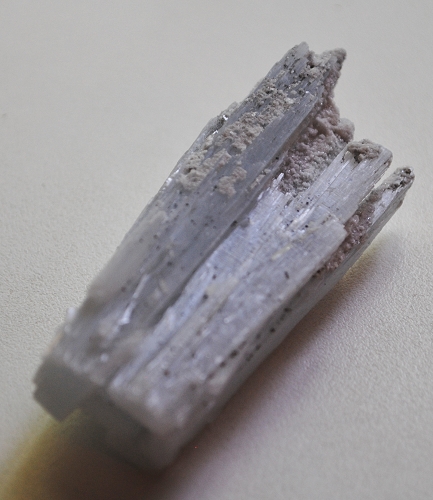 SCIENTIFIC: Anhydrite is a form of calcium sulfate that is one of the minerals found in evaporate deposits most often occurring in salt deposits associated with gypsum and halite. Anhydrite usually forms massive, tabular, granular or coarsely crystalline habits. Anhydrite’s hardness is rated at 3.5 on the Moh’s scale of mineral hardness. The name Anhydrite comes from the greek word “anhydrous” which means “without water.” Anhydrite color ranges from colorless to white, as well as, brown, red, gray and pale shades of pink, blue, and violet. Anhydrite is transparent to translucent with a vitreous to pearly luster. Anhydrite is found in Nova Scotia, Canada, Germany, France, Mexico, Switzerland, Italy, Brazil, China, Australia, Spain and the USA.

ATTRIBUTES: Anhydrite is a stone of the consciousness.  Anhydrite facilitates strength and understanding of the transient nature of our physical body. Anhydrite offers energetic vibrational support while we are on the earth plane. Anhydrite supports gratitude for the lessons of the past and what has been and for what is present now. Anhydrite facilitates the acceptance of the unknown and future events. Anhydrite provides the energy for the acceptance of all the changes and situations which one has the opportunity to experience. Anhydrite also identifies behaviors or actions that one can change so given the same situation again, one’s response may be different. Anhydrite helps one move through stuck emotional patterns and establishes a renewed energetic flow throughout the aura and the physical body. Anhydrite helps to promote loving communication with those who have a different point of view. Anhydrite helps one release old behavior patterns of vengeance, anger, and resentment. Anhydrite clears distractions from the mind and from the environment promoting clarity of thought. Anhydrite facilitates the conscious connection between Earth dwellers and spirit and inter-dimensional beings of light. Intuitive awareness is heightened as Anhydrite aligns the light frequencies between the user with inter-dimensional light beings and spirit guides.

HEALING: Anhydrite may be used in the treatment of disorders of the throat and to help ameliorate water retention and swelling. Anhydrite may also help those to heal from knee operations and those who have an enlarged heart.

Anhydrite may be useful for past-life healing and connecting with one’s spirit guides.

In crystal body layouts or healing grids, when placed on the third eye, Anhydrite opens and empowers intuition. Anhydrite may be used to cleanse the auric field to remove negative energies and blocks, erase implants, facilitate harmony and reconnect back to source.

For Gaia Healing, Anhydrite may be placed in an area of disturbed Earth energy to connect with the spiritual realms of a place.

The energy of Anhydrite combines well with Azeztulite, Petalite, Danburite, and Diamond.