ATTRIBUTES: Agates are grounding, soothing and calming crystals creating emotional, physical, and intellectual balance. Agates aid with centering and stabilizing physical energy. Agates harmonize yin and yang, the positive and negative forces that hold the universe in place. Agate helps to build self confidence and self-esteem. Agate enhances mental functions, improves concentration, perception and analytical abilities. Agate may help one overcome negativity and bitterness of the heart. Agate helps to release anger and fosters love and the courage to start over. Agate raises consciousness, links awareness to the oneness of life and the assimilation of life experiences creating spiritual growth and inner stability. 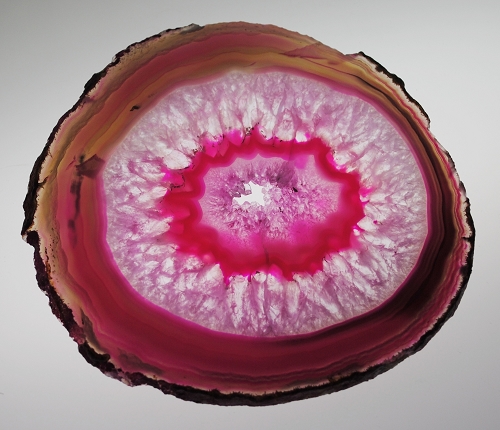 BOTSWANA AGATE is an excellent crystal tool for anyone connected with fire or smoke. Botswana Agate is beneficial for smokers and those who want to quit smoking. Botswana Agate looks to solutions rather than dwelling on problems. Botswana Agate helps you to explore unknown territory and your own creativity. Botswana Agate may be useful in helping the body to assimilate oxygen, benefiting the circulatory system and the skin. Botswana Agate may also alleviate depression and stimulates the crown chakra, bringing energy into the auric field. 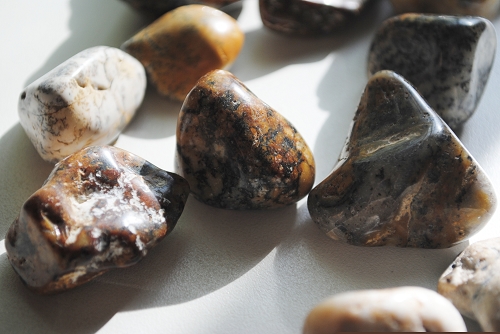 FIRE AGATE with strong grounding powers, offers support during difficult times. Fire Agate has a strong protective function, especially against ill-wishing, building a protective shield around the body returning harm back to its source. Fire Agate may help to heal stomach ailments, the nervous and endocrine systems and circulatory disorders. Fire Agate aids eyes, strengthening night vision and clearing vision at the inner, intuitive levels and outer, physical levels. Fire Agate resonates with the triple-burner meridian and can be applied to bring balance, reducing hot flashes and removing heat from the body.

MOSS AGATE is said to refresh the soul and enable you to see the beauty in all you behold. A birthing crystal, Moss Agate assists midwives in their work, lessening the pain and ensuring a good delivery. Moss Agate is a stone of new beginnings, a stone of wealth, attracting abundance. Moss Agate helps intellectual people access their intuitive feelings and assist them in channeling their energy in practical ways. Moss Agate speeds up recovery, and can be used to counteract long-term illness. Moss Agate is anti-inflammatory, cleanses the circulatory and elimination systems, encouraging the flow of lymph, and boosts the immune system. Moss Agate also treats fungal and skin infections.

TREE AGATE is a stabilizing stone that instills a feeling of safety and security especially when faced with challenging situations. Tree Agate helps one realize the gifts that may be received from overcoming unpleasant circumstances. Tree Agate creates a powerful connection with the nurturing energy found in nature. Tree agate is an excellent earth healing stone for trees and plants. 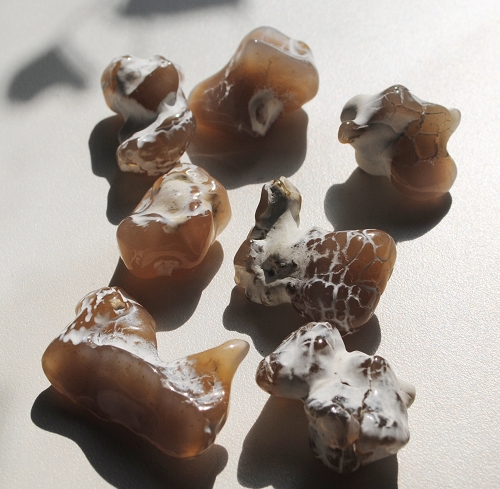 BAMBOO AGATE is actually a stalactitic chalcedony that was created through a process called silicification; the bamboo plants covered by volcanic ash became fossilized when the organic matter of the plant was replaced with silica-iron rich ground water and hardened over time through pressure and temperature. Bamboo Agate provides a pathway for receiving thought transmissions, telepathy and useful for balancing the energy of the body, mind, emotions and spirit. Bamboo Agate is a wonderful crystal tool encouraging a sense of community and enhances goodwill and generosity. The pale yellow color of the Bamboo Agate is invigorating and is uplifting for the emotions. Bamboo Agate has a nurturing and balancing energy alleviating hostility, irritability and melancholy. Bamboo Agate absorbs negative energy and dissipates it to prevent onward transmissions. In healing, Bamboo Agate may be used to improve assimilation of minerals and to help combat build-up of materials in the veins. Bamboo Agate is said to cure varying forms of dementia, to rectify senility, to increase mental stability and physical energy. Bamboo Agate balances the physical body, as well as, the emotions, mind, and spirit. Bamboo Agate may be helpful in healing the eyes, gallbladder, bones, spleen, blood and circulatory system. 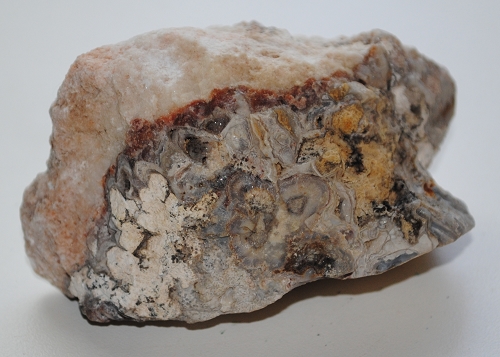 GRAPE AGATE is a botryoidal form of purple Chalcedony. Grape Agate is named for its clusters of small spheres and aggregates. Grape Agate is a stone for transformation. Grapes have been cultivated for thousands of years. It has been said (and thoroughly tested by some) that some of the best wines have come from grapes who have tenaciously grown in difficult soil conditions.  The process from vine fruit to an intoxicating beverage, the story of grapes creates the perfect allegory for transformation. Grape agate provides grounding, soothing and calming energies creating emotional, physical, and intellectual balance. Grape Agate supports one with the building of self confidence and self-esteem. Grape Agate provides an energetic pathway for receiving thought transmissions, increases telepathy and perception, enhances mental functions, improving levels of concentration and analytical abilities. Grape Agate aids with the development of personal integrity and enhances generosity. Grape Agate replaces self-centered behaviors with benevolent actions prompted by spirit. Grape Agate has a nurturing energy, alleviating feelings of hostility, bitterness of the heart, irritability, and melancholy. Grape Agate helps to release anger and fosters love giving one the courage to start over. Grape Agate may also serve as a reminder to drink from life’s pleasures and experience lightness and joy especially in the company of good friends. As a healing stone, Grape Agate may be stimulating for the nervous system and helpful to activate healing of brain damage. Grape Agate may also relieve neuroses, and inflammation of the nerves and eyes. Grape Agate is also considered a powerful crystal tool for healing the throat and communication issues. Grape Agate counteracts blocked self-expression releasing shoulder and neck problems, thyroid deficiencies, and throat and lymph infections.